Boroondara Council can provide a TravelSmart map (2.64 MB pdf) for the Boroondara area and surrounds. These maps are also avalaible for other areas and should be considered essential equipment for anyone who wants to determine the location of the bike paths and on road bike lanes in their immediate area. Don't pass them up. To pick up a printed copy, go to the customer service counter at:

Alternatively, please call the Council’s Traffic and Transport Department on 9278 4549, who will mail one out to you. A less detailed off road path and on road cycling lanes map for Boroondara is available here. 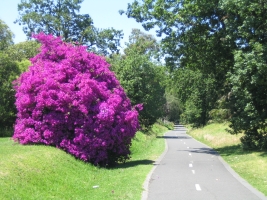 For your local trails and going clockwise around Boroondara: - see these external links at Wikipedia:

Boroondara has a growing network of on-road bike lanes on both main and local roads. This map is a few years out of date but still useful!

Existing and Proposed new PBN network
See this map also - 1 meg download
Or just have a look at them in OpenStreetMap.

When cycling from "A" to "B" there are several aspects of the ride to be considered and prioritised. They are: Interaction with traffic eg. crossing and use of busy roads

Generally, the less interaction with traffic, the better. Apart from the safety factor, more traffic means more exhaust fumes and more noise. Also, while there is plenty of room for bikes on some busy roads, especially if they have designated bicycle lanes, others simply feel unsafe and intimidating.

Observation and gut feeling should influence final choice of roads. Road surfaces can vary. This is where the choice of bike may determine where you can go. Roads are generally maintained with cars in mind; road edges and cycling paths are often neglected.

Being close to trees, paths suffer from tree-root damage, so this is where suspension is useful. Most bike paths in Boroondara are of a high quality and underpass major roads, but they can meander a bit. It would often be quicker to take a more direct arterial road. When making a trip regularly, it can take months to refine. This can be very satisfying. It's worth exploring apparently dead-end streets as there is often a way through for bikes, sometimes with a connection through a park and beyond. It's sometimes better to take a different way home with less climbing, or a safer approach to an intersection. For the same reason, it may be more efficient, safe or pleasant to take a slightly longer route. Always be open to doing something different but do make self-preservation your number one priority.