Cycling infrastructure is not just installing x kilometres of lanes per year. In fact there is often vigorous debate on the usefulness and or effectiveness of cycling lanes. One of the main criticisms stems from the fact that if the lane is too narrow, the cyclist is forced to cycle in the door zone of cars parked adjacent to the lane. The false sense of security instilled by the lane can be hazardous to the cyclist. If the lane is too narrow, the more experienced cyclist will decline to use the lane, in order to protect their own safety. Often the argument extends to whether segregation of bicycle and motorised vehicles makes sense in the first place. Melbourne is perhaps unique in the sense that many of its cycling lanes just disappear at intersections, resulting in motorists and cyclists being led into direct conflict.

Having stated the above it's useful for pedestrians, cyclists and motorists to have an understanding of the different types of bike lanes that are found in the wild. A legally binding bicyle lane must start with a start bicyle lane sign and finish with an end bicycle lane sign. There are four main types of bicycle lanes:

A VicRoads FAQ states this: "Are drivers allowed to use bike lanes?

Yes, but for no more than 50 metres, and only where necessary to pass a vehicle turning right, to enter or leave a side street, another traffic lane or parking space, or where stopping or parking is allowed."

Note the last part about "where stopping or parking is allowed" ie cars can use the lane on an ongoing basis ie as a parked vehicle depending on the stated parking restrictions next to the lane.

A few Copenhagen style lanes have been introduced in Melbourne. Most noteably in Swanston St in Carlton. Cars are not permitted to enter these at any time. Copenhagen lane next to one of the most famous buildings in Spain. 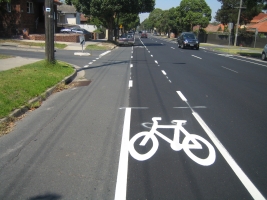 Parking is not an issue, as it's provided for separately - the bike lane is always exclusive. This type of lane is also highly desirable to cyclists. While suddenly opened car doors remain a hazard, the cyclist can at least be sure that vehicles will not be parked in the lane. This style of lane is by far the commonest in Melbourne. 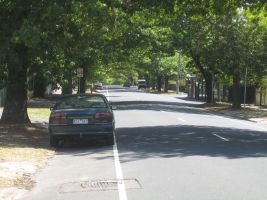 For this style of lane the road typically is just too narrow to allow car parking on both sides. Most exclusive bike lanes only operate during clearway times and the line may be painted as an ongoing dotted line. Outside clearway times cars can legally park over the bike lane. However any vehicle parked in the lane forces the cyclist to enter and occupy the righthand lane in order to pass the parked vehicle - the cyclist risks their safety in this case. Signage should make it clear when and if parking is allowed. This type of lane is the most desirable from a cyclist's point of view when the parking restrictions are adhered to by motorists. They also have the advantage of being free from the danger of suddenly opened car doors.

There are no signs re parking or not parking along this section of Mont Albert Rd in the photo. Is this car parked correctly?

A Shared Bike/Parking Lane is similar to an Exclusive Bike Lane but you can park on it at any time. Quiet often the road is wide enough to allow car parking on both sides together with a smallish gap beside the parked cars, which allows room to pass the cars while cycling. Most of the time the road will be sparsely parked leaving a fairly continuous wide lane for the cyclist. It can be thought of as a wider EBL with 24 hr parking available. Suddenly opened car doors still remain a hazard. This style of lane is more often found in country towns.

The WKL is the least desirable form of on-road "lane". It is only free of cars when parking restrictions indicate you can't park there.

The WKL is usually identified by a short dotted line and a bicycle symbol - see photo. Occasionally the dotted line is not used at all, leaving just the bicycle symbol. The WKL is advisory only and indicates you may see bikes along this route and in fact the road is wide enough to accommodate bikes and cars side by side and means nothing else. It is not legally considered a Bicycle Lane.

This style of lane is fairly rare being installed mainly in the early days of on road cycling lanes. They occur primarily in the Council areas of Yarra, Boroondara and Stonnington. However there has been a disturbing trend, whereby they are being installed on newly built roads (2010). Cheltham Road at the new George St railway crossing in Dandenong is an example.

"Wide Kerbside Lane: A traffic lane free of parked cars and of sufficient width to permit cyclists and motor traffic to travel within the lane without significant impact on each others paths. It is generally located at the left side of a road. It may also be associated with a two way / two lane road or a multi lane road."

Clockwise around Boroondara - refer to these Wikipedia articles on your local trails: 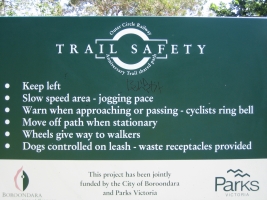