The Yarra Trail starts at Southbank and follows the river upstream. It enters Boroondara at the Fairfield pipebridge and leaves at Burke Rd, where it continues to Westerfolds Park.

Currently there is a large grade difference between the Fairfield pipebridge crossing the Yarra River and Chandler Hwy, as the trail is routed via a high point on Yarra Boulevard - green colored route. The route needs to be ironed out by removing the ascent to Yarra Boulevard - refer to mauve colored route. A substantial staircase at Chandler Hwy also has to be negotiated. The staircase needs to be eliminated. Refer to pdf diagram for suggested new routes.

BBUG have campaigned to have these problems rectified. You can also help! Have your say. Download, print, complete and mail the Letter to campaign State government for funding its completion. Letter may need to be modified to suit the current political leadership - the wheels turn slowly. Join the hundreds whom have already joined our efforts.

Until an underpass is installed under Chandler Hwy, it would be benefical if the Yarra Trail shared path led directly to the nearby pedestrian crossing on each side - it's extremely unclear where the path runs presently. The crossing electronics should be altered so that the pedestrian buttons stop both lanes of traffic simultaneously, as opposed to one lane of traffic at a time, as they are currently set to do. The pedestrain crossing is rarely used due to these failings, which is unfortunate.

Another item that needs attention is the surface of the pipebridge, which is slippery in wet weather. The bridge is narrow and this adds to the risk of a crash. 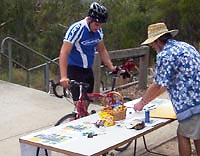 VicRoads publishes details of temporary diversions for cyclists and pedestrians through and around the works area. Access has been maintained under the bridge and on the eastern side of the Chandler Highway.

Final designs for the bridge are released. They include removal of the steps and provision of a new shared cyclist/pedestrian path leading across the heritage bridge. Better linkages with the Yarra Trail are provided. However, issues still remain with north-south connectivity, access into the Alphington Paper Mill development and the pedestrian traffic lights at the intersection with Yarra Boulevard.

Boroondara Council endorses the bridge design concept and calls for changes. These include improving connections south of the bridge to the Anniversary Trail.

The first designs for a new Chandler Hwy bridge appear out of VicRoads. No mention of any underpasses for the Yarra Trail.

The Chandler Hwy crossing and nearby intersections are fast bubbling up towards the top of the list of the most congested locations in Melbourne that need fixing. Will 2011 see work begin on a new crossing of the Yarra River, complete with a river crossing for cyclists and an underpass of the Chandler Hwy for cyclists?

It's likely VicRoads is developing plans to duplicate the bridge crossing at Chandler Hwy - a RACV red spot. Consequently it seems unlikely any underpass will be put in place, until the bridge is duplicated. In the interim there is still no reason why the trail colored in mauve cannot be sealed. This would be a useful improvement that would be of immediate use.

$50,000, in funding for the design of a Yarra Boulevard trail realignment announced.

It has been suggested that the new route may utilise a tunnel under Chandler highway. It would be close to the same level as the top of the stairs and meet up with the existing ramp on the east side of Chandler Highway. See the yellow line on map above. The stairs could be eliminated completely and returned to parkland.

It is rumoured that the one remaining pipe on the pipebridge is no longer in use or required. Removing the pipe from the bridge and rebuilding the decking would be a major improvement to this asset.

Yarra Bend Trust have appointed designers and stakeholders were invited to view initial concepts for feedback. The draft looks good and will make the Yarra Trail a far more rideable trail not only for the hundreds of daily commuters but also the recreational riders who use it on the weekend.

Feedback indicates that this link could be started within 12 months, greatly helped by recent funding increases for bike facilities from State Government.

A very successful day for BBUG saw us out at the Chandler steps at 9am and quickly running out of letters to sign! Feedback was overwhelmingly positive (if not short of breath!) with almost everyone we could speak to as hundreds of cyclists flowed past signing up to support BBUG's efforts to see the Chandler riverpath completed.

Whilst this vital link to the Yarra Trail has been approved by government for many years, sadly it has not attracted the funding necessary to actually complete it.